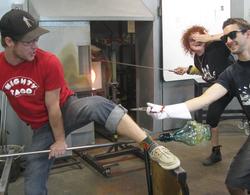 ​The growth of a glass maker.

Austin Littenberg was first introduced to hot glass during a demonstration at the Corning Museum of Glass in Corning, New York, in the summer of 2001. In the fall of 2001, he was enrolled in a lampworking class at More Fire Glass Studio in Rochester, NY. Two years later, at the age of 17, Austin built a lampworking studio in his mother's basement outside of Buffalo, NY, and began working independently. In 2004, Austin was introduced to goblets by the Italian lampworking master Emilio Santini during a class at The Studio of the Corning Museum of Glass. He was accepted into the glass program at Bowling Green State University, and moved to northwest Ohio in 2007, graduating under Scott Darlington in 2011 with his BFA in glass. After graduating, Austin worked in Toledo, OH, as a studio technician at the Toledo Museum of Art's Glass Pavilion, while also assisting many artists privately, teaching classes, and working on his own creations until 2015. Now, Austin lives in Northern Arizona and works full-time as a hotshop glassblower, instructor, and designer at The Melting Point in beautiful Sedona, AZ.